Wednesday, 2 May 2012 will be remembered by the euphoric children of the Chimvite Community - located at Mpingu Trading Centre in Traditional Authority Malili in Lilongwe Rural South West - as the day when a new chapter in their lives was opened in their pursuit for quality education. It will be remembered by the enthusiastic mothers and fathers as the day when their hopes and aspirations for their children's futures were raised up in the sky. They all had impatiently waited for this particular day!

Furthermore, the Inauguration Ceremony of the Chimvite School Library and Teachers’ Office Block - a construction project coordinated by the Child Rights Information and Documentation Centre (CRIDOC)) with financial support from USAID Malawi - could not come at a better time, just a week after Global Campaign for Education (GCE) spearheaded the commemorating of the worldwide annual campaign dubbed Global Action Week (GAW) for Education. Millions of teachers, students and education advocates around the world joined forces in calling on public authorities and development partners to ensure that all young children have access to quality early childhood education.

The Chimvite School Library and Teachers’ Office Block Project started in January 2011 and it was completed by December the same year, thanks to the commitment of the community members who voluntarily worked hard to ensure that the project was completed in time.

Before the commencement of the project, the people of Chimvite had already shown commitment to help themselves by moulding bricks. But all they needed was external support in order to help them actualize their aspirations, their dreams to make their school a better learning environment for their children. That support, eventually, had to come all the way from the American people.

It is for this reason that CRIDOC, the school management, the learners, and the community were all gathered at the school not only to witness the official hand-over ceremony of the structure, but also to thank in a special way the American people, through Mrs. Diana Enzi, wife of the US Senator Michael Enzi, for their generosity.

CRIDOC, under the facilitation and supervision of its founder, Mr. George Mwika Kayange, who is currently the organization's Director, was motivated to voluntarily mobilize the community and other stakeholders to construct the teachers’ office that also hosts a library because the organization wanted to fulfil one of its mandates which is to create access to information on child/youth development, rights, or related issues through documentation.

Chimvite Primary School is one of the schools in the rural areas of Lilongwe District that, for a long time, had one of its structures in a rather dilapidated state, thereby drastically compromising the quality of education. The school did not have basics such as proper offices for both teachers and the Head Teacher.

When CRIDOC staff, led by Mr. Kayange,  visited the school on 21 November 2009 as part of their routine advocacy work, the school had a makeshift office for the Head Teacher with grass-thatched roof as well as walls made of grass and tree planks, and without any doors. Basically, what the situation meant was that no single educational materials were kept in this makeshift office as there was no security at all. The makeshift office was also inhabitable during the rainy season.

Besides lack of offices for both the teachers and the Head teacher, the school did not have a library where pupils could go to study or borrow books and other reading materials to read in their homes.

The main interest of CRIDOC in the project was to ensure that pupils exercise their right to access information and education materials. The project will enable the organization to provide such information/educational materials; to facilitate and enhance the reading culture in school; among other things.

CRIDOC's role had been collaborating with the chiefs, the Member of Parliament for the area, and the Chimvite Primary School Management Committee in ensuring that the project was completed within the one year time frame.

The Chimvite Primary School has an enrollment of 892 students with 453 boys and 439 girls.   The nearest neighbouring school is over approximately four miles away. 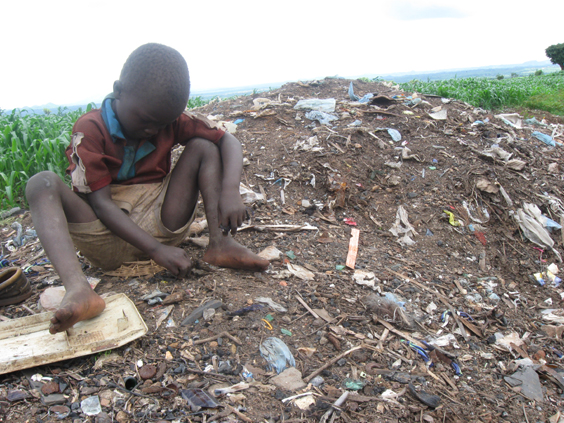 The Hustle of Turning Hustling “Scavengers” into Youth Entrepreneurs